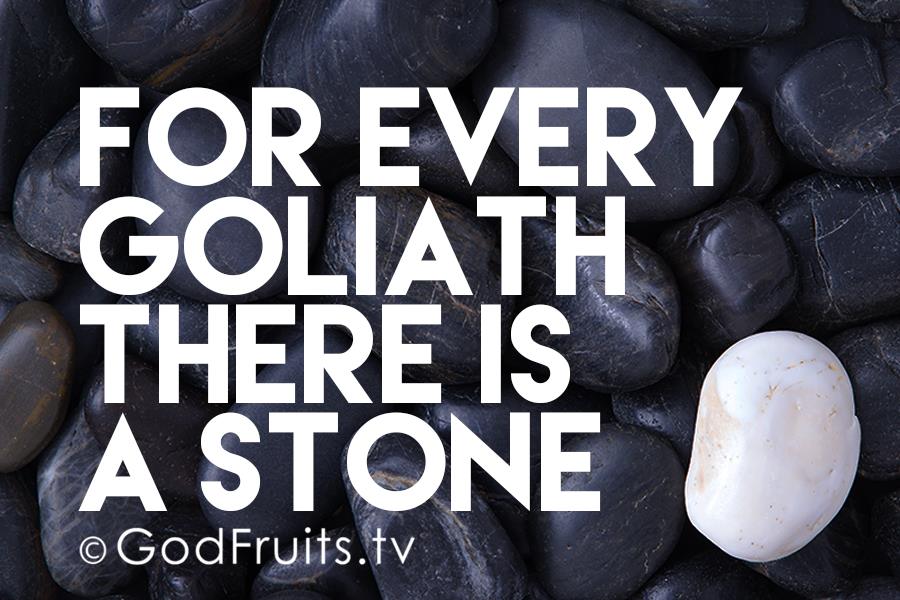 Giants were actual biblical figures (Gen. 6:4, Num. 13:33), which intimidated and triggered fear in man. If used as an analogy, giants are obstacles and fears that hinder God’s direction in our life. New career paths, a step into ministry, a move, an illness, or some monumental challenge are all calculable Goliaths.

Fear is innate, a healthy survival instinct. But fear should be a manifestation that produces positive action. Too often fear hinders our spiritual growth. It is a mighty weapon utilized by the devil and many saints have stood petrified before ominous figures or obstacles.

A popular phrase, “If God brings you to it, He will lead you through it,” is a true statement. The Bible backs it up, but the courage to face these giants will require faith in God’s power and His steadfast love for us.

“Be strong and of good courage, do not fear nor be afraid of them; for the Lord your God, He is the One who goes with you. He will not leave you nor forsake you.” Deuteronomy 31:6

By studying the battle Saul faced when the Philistines sent their mightiest soldier,

9’6” giant Goliath, to defy the armies of Israel, we can learn much. Here was an actual giant with a clear height advantage! Saul was probably 7 feet tall and David, a young man at the time, was probably less than six feet. Although Goliath intimidated Saul and the men of Israel, David was not afraid of the Philistine champion. Why?

“And he had a choice and handsome son whose name was Saul. There was not a more handsome person than he among the children of Israel. From his shoulders upward he was taller than any of the people.” 1 Samuel 9:2

“And a champion went out from the camp of the Philistines, named Goliath, from Gath, whose height was six cubits and a span.” 1 Samuel 17:4

Acts 13:22 describes David as, “A man after My own heart.” Some Christ-like characteristics manifested in David’s life include his devotion, trust, love, reverence, and faith in God. When David heard Goliath’s taunt, a righteous anger rose within his heart. He rebuked the men of Israel for fleeing in dreadful fear.

“And all the men of Israel, when they saw the man, fled from him and were dreadfully afraid.” 1 Samuel 17:24

The words, which David spoke, were then reported to Saul, who sent for him.

“Then David said to Saul, “Let no man’s heart fail because of him; your servant will go and fight with this Philistine.”

And Saul said to David, “You are not able to go against this Philistine to fight with him; for you are a youth, and he a man of war from his youth.” 1 Samuel 17:32-33

With this dialogue, we see Saul assessing David’s size and ability. Surely he admired David’s courage but doubted his power to overcome the mighty giant. David then continued by telling King Saul of his shepherd experiences, defending the lambs in his charge.

But David said to Saul, “Your servant used to keep his father’s sheep, and when a lion or a bear came and took a lamb out of the flock,  I went out after it and struck it, and delivered the lamb from its mouth; and when it arose against me, I caught it by its beard, and struck and killed it. Your servant has killed both lion and bear; and this uncircumcised Philistine will be like one of them, seeing he has defied the armies of the living God.”  Moreover, David said, “The Lord, who delivered me from the paw of the lion and from the paw of the bear, He will deliver me from the hand of this Philistine.”

“The Lord will cause your enemies who rise against you to be defeated before your face; they shall come out against you one way and flee before you seven ways.” Deuteronomy 28:7 (NKJV)

At this time, Saul was out of God’s will. If we are out of step with God, the obstacles in our life will also seem like Giants. But if like David, we are abiding in Christ, relying on the tried and true promises of God, we will be overcomers. We are already victorious through Christ Jesus. What can man do to us if God is our righteous shield? He will strengthen and prepare us for every battle and journey, obstacle or adversary.

“Cast your cares on the Lord and He will sustain you; He will never let the righteous be shaken.” Psalm 55:22

“I will call upon the Lord, who is worthy to be praised; So shall I be saved from my enemies.” Psalm 18:3
**Meditate on the following scriptures and pray over any giants now in your life.

“For God has not given us a spirit of fear, but of power and of love and of a sound mind.” 2 Timothy 1:7

“The Lord is on my side; I will not fear. What can man do to me? The Lord is for me among those who help me; Therefore, I shall see my desire on those who hate me.” Psalm 118:6-7

“The Lord is my light and my salvation— whom shall I fear?

The Lord is the stronghold of my life— of whom shall I be afraid?” Psalm 27:1

“Fear not, for I am with you; Be not dismayed, for I am your God. I will strengthen you, Yes, I will help you, I will uphold you with My righteous right hand.’” Isaiah 41:10

“Have I not commanded you? Be strong and of good courage; do not be afraid, nor be dismayed, for the Lord your God is with you wherever you go.” Joshua 1:9

**Photo is from my recent trip to Israel. It is of the Valley of Elah